For some reason it seems that some people are shocked that we say that kitniyot is batel berov. I see lots of rumblings online. People are asking if there are any other Rav that agrees with Rabbi Abadi on this seemingly radical opinion that kitniyot is batel berov. The following is a page from the Mishneh Berurah. It’s pretty clear. I don’t understand what the question is. If a product is made and kitniyot is less than 50% it’s kosher. Unless it was done deliberately to cause the kitniyot to become batel. No manufacturers deliberately tries to be mevatel kitniyot. They follow the recipe. 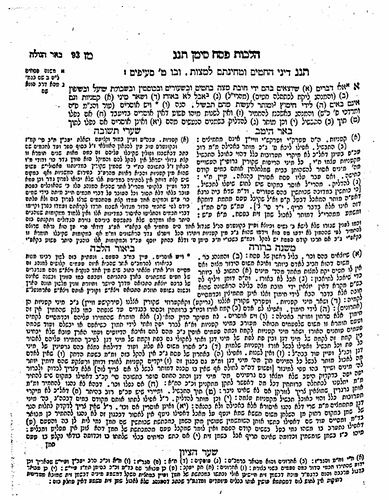 Some of our minhagim spiral out of control and get so far from what was intended. We need to reel them in to authentic Halachah.

Can bitul berov occur on Pesach? Or all items mush be purchased before hand?

It can occur on Pesach

Sorry, but I’m still a little confused on this topic. I understand about batel berov if it’s something I buy in the store. If I cook at home a vegetable dish and want to season it with gluten free soy sauce, is this batel berov or assur from the point of view that I’m doing it with intent (even if this is the way I would generally season it)? Can I serve it to guests that do not eat kitniyot?

If you are allowed to eat kitniyot and that’s your recipe, then you are not deliberately being mevatel the issur. The purpose of using the soy sauce is to complete the recipe. Once the meal is made, the issur is batel and you can serve it to your Ashkenazi friends, if they accept these halachos from the Shulchan Aruch and the Mishnah Berurah.

However, if you’re Ashkenaz and you are making food for Ashkenazim, if you include Kitniyot, then I believe that you are deliberately being mevatel it in this scenario, and that’s not ok. Soy sauce is a bad example, because there’s a good chance that the water already is mevatel the soy, and the idea that soy is even Kitniyot is a bit far fetched. But you get the idea.

Please new aware that not all Kitniyot become batel. For example if it is be’en, meaning it is not thoroughly mixed in, then it’s not batel. If an ashkenazi comes to a Sephardi home and they’re serving chamin, made with meat and chick peas, they still can’t eat the chick peas.
In all these products we only approve Kitniyot for Ashkenazim when it’s thoroughly mixed, like vinegar, mustard, corn syrup, etc. if it’s a soup that’s pureed, it’s ok. If it’s a soup with beans or rice that are just floating there, an Ashkenazi cannot eat that.

The same applies to rice as all Kitniyot. I was asked to write this, though I cannot imagine why someone would think differently. Rice is the classic Kitniyot. One of those listed in the Ram”a.

The problem is that the Mishna Brurah only allows it if it’s not Nosen Taam, but you allow it even if it is Nosen Taam.

I believe you are mistaken.

That part of the MB is in reference to Chametz